As has been the case every year for the past 11 years, the pilgrimage Ad Petri Sedem, i.e. the procession to the See of Peter of the Catholic people attached to the traditional liturgy, will take place from 28 to 30 October. This 11th international pilgrimage, which will be the second after the publication in July 2021 of the motu proprio Traditionis Custodes, is part of a vast movement whereby a part of the Christian people give witness of their attachment to the traditional liturgy. At the same time, on 28 October, in the large amphitheatre of the Augustinianum, just a stone's throw from St Peter's Square, we will be holding our VIIth Pax Liturgica Meeting, bringing together a prestigious group of friends and defenders of the traditional liturgy.

We asked Father Claude Barthe, Chaplain of the international pilgrimage Ad Petri Sedem, and Christian Marquant, President of Paix Liturgique, to present these two events to us. 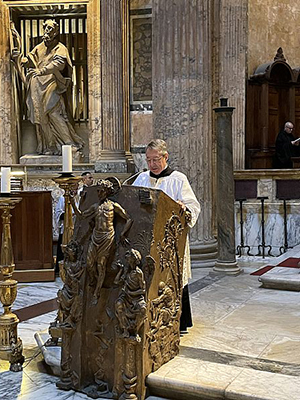 Louis Renaudin: Then, it is true that the Summorum Pontificum pilgrimage to Rome will also be taking place this year?

Father Claude Barthe: Yes, as it has every year since 2012! It's true that this year, as last year, the situation is rather peculiar: in 2021 it was the health crisis that disrupted our pilgrimage, but without preventing it, and in 2022, we don't really know what can be done or not.

Claude Barthe: Yes, Deo gratias! We obtained without difficulty the authorisation to end our Roman procession with the celebration of a mass according to the usus antiquior at the altar of the Chair in Saint Peter's in Rome, a pacifying gesture by the cardinal-archbishop of the Basilica. And we also received a gesture of friendship from one of the highest personalities of the Italian Church.

Louis Renaudin: Who would that be?

Claude Barthe: Cardinal Matteo Maria Zuppi, Archbishop of Bologna, President of the Italian Episcopal Conference, who has immeadiately accepted to preside over the pontifical vespers which are organised in the Church of Saint Mary of the Martyrs - i.e. the Pantheon - on the first day of the pilgrimage.

Louis Renaudin: What will be the programme of the pilgrimage?

Claude Barthe: You can find out the detailed programme of the pilgrimage on the website https://site.summorum-pontificum.org/, but basically, as in previous years, the pilgrimage will take place over three days, starting with Vespers at the Pantheon, which I have just mentioned, then the next day there is an Eucharistic adoration in the church of Saint-Celse, followed by a procession to Saint Peter's, where Mass will be celebrated in the basilica, and finally a Mass of thanksgiving on Sunday at the church of the Most Holy Trinity of the Pilgrims.

Louis Renaudin: Will there be many people in this year's pilgrimage?

Claude Barthe: It is difficult to know how many pilgrims there will be, because there is no registration required to come and participate. But remember that last year, in the midst of the health crisis, there were more than 500 people for the procession from St. Celse to St. Peter's and many more than 1000 in the basilica. Therefore, this year, we are rather confident that we will again reach the numbers from before the storm.

Louis Renaudin: And where do they come from, these pilgrims?

Abbot Claude Barthe: What we know is that every year they come from many countries. Last year more than 28 nationalities were represented, illustrating the universal character of the attachment to the traditional liturgy. This year we naturally hope to expand even further this Catholic diversity. 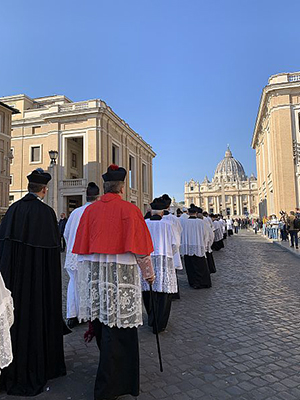 Louis Renaudin: Is the pilgrimage open to all?

Claude Barthe: Absolutely, our pilgrimage is an act of piety towards the Church and not a sports event! Therefore, it is accessible to all, young and old. But above all, it is open to all diocesan priests, religious, communities, and to Catholic faithful of all categories. They all share the intention to pray for peace in the Church.

Louis Renaudin: Who is the organiser of the pilgrimage?

Claude Barthe: The organiser of the pilgrimage is the CISP (Cśtus Internationalis Summorum Pontificum), an international association which federates 13 associations, some of which have an international character, such as Una Voce, while others are based in a specific region, whether in Italy, Germany, Great Britain, Spain, Portugal or France.

Louis Renaudin: How can we help you?

Claude Barthe: In many ways... For example, by taking part in the pilgrimage and helping to organize it, or by praying for its success, or still by contributing to the organisational costs. For more information on the full programme of the pilgrimage https://site.summorum-pontificum.org/ 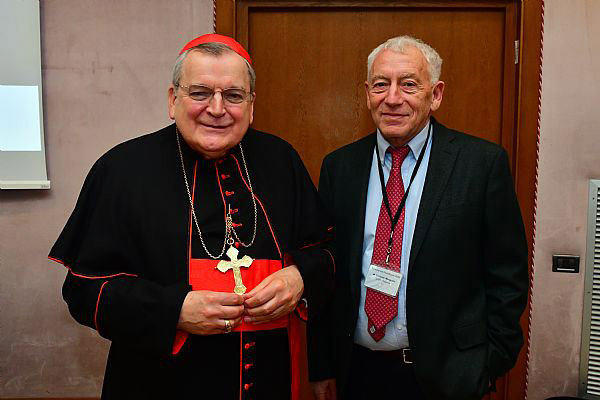 President of the Movement for Paix Liturgique (Liturgical Peace)

Louis Renaudin: This year, you are resuming your "Summorum Pontificum" meetings in Rome, which open the pilgrimage ad Petri sedem?

Christian Marquant : Absolutely, and for the 7th time! But with a change of name, because while "Summorum Pontificum" has been thrown into the dustbin, our determination to see Peace and Reconciliation installed in the Church remains intact. From now on, therefoe, our Roman meetings will be held under the name of "Pax Liturgica", which all the participants fully understand.

Louis Renaudin: At the Augustinianum, as usual?

Christian Marquant : Yes, we are back at the Augustinianum after two turbulent years... A place perfectly located for our meetings, just a stone's throw from Saint Peter's Square.

Christian Marquant: It is the logic of these meetings to allow our participants to meet each time new defenders of the traditional liturgy. And this year we will once again have a panel of speakers of excellence, who will illustrate the universal character of the interest in traditional liturgy. The detailed programme of the day is presented here below. 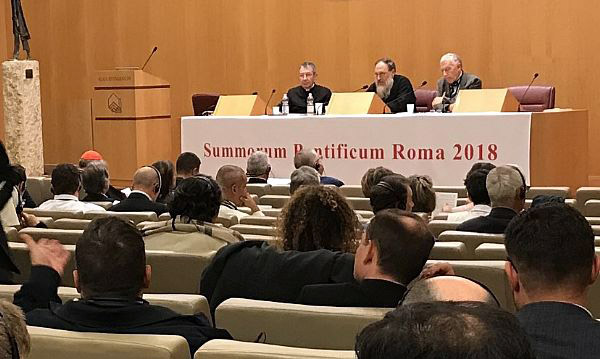 Louis Renaudin: How many participants do you expect?

Christian Marquant: In 2019, we had nearly 200 participants; in 2020, despite the conditions of a semi-confinement, we had more than a hundred nonetheless. This year ,we hope to bring together a good number of participants, considering that we already have over 150 registrations from 15 different countries! The big amphitheatre of the Augustinianum can wwelcome nearly 300 persons, which means that everyone can still register through this link https://bit.ly/3wNdENm ... but don't wait to long!

Louis Renaudin: What language will the speakers use?

Louis Renaudin: Is there a fee for participating in the Meeting?

Christian Marquant : Participation in the Meeting is free... but as we offer a buffet lunch, we ask those who can afford it to pay a minimum of 10 €. 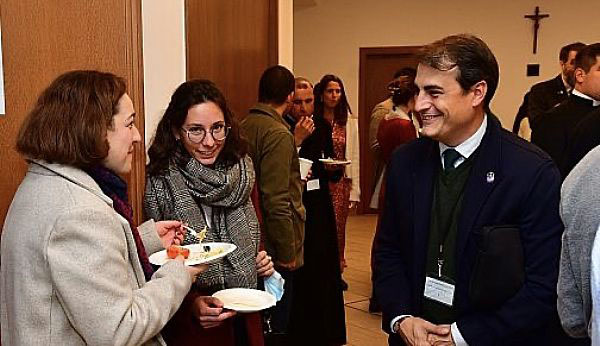 Louis Renaudin: Your first day will be concluded with the singing of the first Pontifical Vespers of St Raphael's Day, presided over by Cardinal Zuppi?

Christian Marquant :Indeed. Our Meeting is a sort of introduction to the pilgrimage ad Petri sedem, which in itself will begin that same Friday with the singing of Vespers, which will be both the closing prayer of our Meeting and the initial prayer of the pilgrimage.

Louis Renaudin: While speaking about the pilgrimage, you mentioned the presence of flags?

Christian Marquant: Indeed, once again this year, through the symbolic presence of their flags, all the associations organising the pilgrimage, and we ourselves are one of them, wish to bear witness to the fact that today the traditional liturgy is alive in more than 90 countries of the world. It is true that representatives of all these countries cannot all be physically present in Rome, but during the procession that will take us from St. Celse to St. Peter's in Rome on Saturday 29 October by the 90, they will be represented symbolically by their flags.

Meeting program and the pilgrimage

09:00 am: Reception of the participants

10:15 am: Trinidad Dufourq, "The traditional liturgy and the pilgrimage of Our Lady of Christianity in the Hispanic world".

11:00 am: Don Nicola Bux : "From Mediator Dei to Summorum Pontificum: the remedies to the collapse of a liturgy celebrated as if God were not there".

2:30 pm: Peter Kwasnievski: "A Church between Legalism and Lawlessness: Recovering Principles of Action in a Time of Anarchy"

3:30 pm: Christian Marquant, "In conclusion, what future for the traditional world after Traditionis Custodes?"

4:00 pm: End of the activities at the Augustinianum.

5:30 pm: Vespers in the Basilica of St. Mary of the Martyrs (Pantheon), organised by the Institute of the Good Shepherd, presided over by His Eminence Cardinal Matteo Maria Zuppi, Archbishop of Bologna, President of the Italian Episcopal Conference

- 9.30 am: Adoration in the Basilica of San Celso e Giuliano, organised by the Institute of Christ the King Sovereign Priest

- 10.30 am: Departure of the Procession to St Peter's Basilica

- 11:30 a.m.: Solemn Mass at the Altar of the Chair in St. Peter's Basilica, celebrated by Msgr. Marco Agostini, of the Secretary of State and Pontifical Master of Ceremonies.

- Solemn Mass of Christ the King in the Church of the Holy Trinity of the Pilgrims, organised by the Fraternity of St. Peter, celebrated by Mgr. Patrick Descourtieux, of the Dicastery for the Doctrine of the Faith.