MARC OUELLET:
THE CARDINAL WHO DREAMS OF
BECOMING THE NEXT POPE? 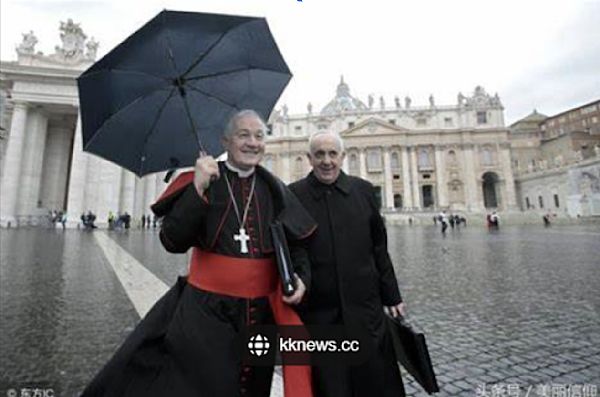 The review Golias has just published, under the signature of Gino Hoel, a vitriolic portrait of Cardinal Marc Ouellet (Golias-Hebdo 718 [April 28-May 4, 2022]: 16-17). The article, though it very much reflects the style and concerns of this far-left Catholic magazine, nevertheless motivated us to find out more about this Canadian prelate. This is why we asked our friend Paul Grondin, correspondent of Paix Liturgique in Quebec, to give us his opinion on the elements given in this entirely incriminating article published by Golias-Hebdo. You can read the article for yourself by clicking on the window below, by permission of the review's director. 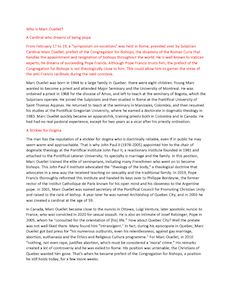 Paix Liturgique – Since you knew him as archbishop, what would you say to the accusations made by Golias about his brief episcopate in Quebec?

Paul Grondin – What the article says is obviously a caricature. It is to the archbishop's credit that he defended Catholic morality, took part in marches for life, and supported religious education in the schools. But contrary to the assessment of Golias, Archbishop Marc Ouellet was not, as it turned out, a very strict conservative, which would rather have pleased me . . . .  In fact, he has now become one of the fierce opponents of the right to the traditional liturgy. On the other hand, the article rightly says that Marc Ouellet has been a conservative in the manner of an apparatchik. Let us say that he is very careerist . . . .for the greater service of the Church, of course! He is not the first nor the only one in the Church, especially today. But his history shows that, as such, he has always shown a strong dose of opportunism.

Paix Liturgique – Perhaps you are being a bit severe . . . .

Paul Grondin – I don't think so. He was the unwavering supporter of the pontiff and his pro-family policy under John Paul II, which, mind you, propelled him to high office. He became a man of the Curia, ultimately a very moderate one, under Benedict XVI. And then, when Francis ascended the throne of Peter, there he was, in his own way, more Bergolian than the Bergolians, but not quite Bergoglian either,  distinguishing himself from those who remained faithful to an intransigent defense of family morality, and becoming a violent opponent of the Ecclesia Dei Commission, the Ratzinguerian heritage par excellence.  Marc Ouellet as a character can only be well understood by taking into account this weathervane aspect, not in a crude way, but with talent, which, if I may say so, is his defining characteristic. It also involves a very great capacity to nurse resentment: he has implacable dislikes (if he were not a priest, one would say hatreds).

Paix Liturgique – Could you give me an example of these “variations”?

Paul Grondin – Note the one I just alluded to: against the most traditional cardinals, Burke, the late Caffarra, his enemy, he opted to defend the encyclical Amoris laetitia in terms far removed from the convictions attributed to him by Golias; he maintained that judging Amoris laetitia "on the sole basis of a footnote alledgedly signifying a break with ecclesial tradition" seems "frankly simplistic, even outrageous."

Paix Liturgique –Is this because he wishes to become pope, as Golias alledges?

Paul Grondin – That, and especially because he wants to remain prefect of his Congregation for as long as possible. And from that post to position himself as papabile, as he has been doing since the pontificate of Benedict XVI. On this point Gino Hoel is quite right, in my opinion.

Paix Liturgique –And you believe he is behaving with that end in view?

Paul Grondin – That's for sure, but to his misfortune he is not alone . . . .  It has to happen soon, however, because he is 78 years old and beyond 80, although he is a cardinal and eligible in principle, in actual fact he could no longer be elected. Like many others, he is keenly aware of the profound failure of Francis' pontificate, which is an additional opportunity for a Bergoglian who is not altogether Bergoglian. But at the same time he must maintain his closeness to the pope, especially to have enough influence on episcopal appointments and to make the pope act as he did in the case of the Dominican Sisters of the Holy Spirit.

Paix Liturgique –What are your thoughts on those French Sisters?

Paul Grondin – Does the article in Golias insist too much on the "privileged relationship" between the Cardinal and the Sister (Mother Marie de l'Assomption), an "intellectual," who now calls all the shots in the congregation founded by Father Berto at Pontcallec? Those in the know say that those two disciples of Hans Urs von Balthasar, the Cardinal and the Sister, reproduce the intense intellectual and spiritual relationship that bound together the theologian von Balthasar and his mystical friend and theological inspiration, Adrienne von Speyr. The Cardinal's preface to her dissertation, her position as driver and assistant [to the Cardinal], her promotion as "Expert" to the symposium on vocations that the Pope himself opened: these are not sinful in themselves, but they are intellectually disordered, I would say, and opportunistically disordered in the current climate of "recognition of the role of women in the Church." 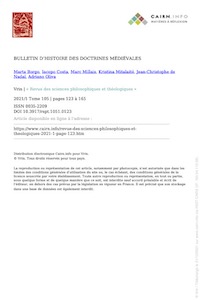 Paix Liturgique – What about this dissertation prefaced by the cardinal?

Paul Grondin – The aim of Mother d'Arvieu's work was, to put it briefly, to rehabilitate the Thomism of Fr. de Lubac against deviant Thomism, which, according to the Sister, is that of Tradis of all stripes. The result is not commensurate with its intellectual ambition, judging by the review Iacopo Costa published a short time ago in the bulletin of the history of medieval doctrines in the very learned Revue des Sciences philosophiques et religieuses 105 (2020): 142-50, which I recommend to all those interested in this whole story.

Paix Liturgique – Why do you recommend this reading?

Paul Grondin – Because the review seriously deflates the theological competence of the Sister who inspires the cardinal, his symposium, and, why not . . ., the next pontificate.

Paix Liturgique –Yet, in this Pontecallec business, didn’t Marc Ouellet have the Pope’s explicit support?

Paul Grondin – More than that: clearly the cardinal is the author of this astonishing "request for forgiveness" of the Pope with regard to the sisters of Pontcallec, in which he harshly criticizes the work of the Ecclesia Dei Commission that had previously resolved the crisis of the community in a way deeply displeasing to Mother Mary of the Assumption. At the end of the day, it was she who made the Pope say that there had been "failures on the part of certain authorities of the pontifical curia", namely the Commission of Bishop Pozzo, arguing "that the accompaniment of which the Institute has been the object since the beginning of his pontificate has not always been adequate" and that he, the Pope, was be "anxious to take responsibility for it".

Keep in mind that part of this affair is liturgical. The religious sisters who have been disavowed (and in some cases dismissed) by the cardinal's maneuvers are those most faithful to the traditional liturgy.

Paix Liturgique – What do you mean by that?

Paul Grondin – I mean to recall that Cardinal Ouellet had taken an important part in drafting Traditionis custodes, with the Cardinal Secretary of State, with Cardinals Versaldi and Stella. One point in particular: you know as well as I do that the Pope justified Traditionis custodes on the basis of the survey on the results of the application of Summorum Pontificum that he had commissioned from the bishops of the whole world through the Congregation for the Doctrine of the Faith. But you also doubtless know that the results of this survey were twisted, manipulated and betrayed, and that a dossier, which the Congregation for the Doctrine of the Faith had ultimately found to be largely favorable to Summorum Pontificum, was used to convince people of the opposite, namely that its application was considered a failure by the bishops of the world. This lined up perfectly with what the document published by the French Bishops' Conference, which you publicized, wanted people to believe (Letter of Paix Liturgique, French edition, 780)

Paix Liturgique – And you think Marc Ouellet is behind this manipulation?

Paul Grondin –  Behind it, I could not say, especially since the Pope had access to the results of the investigation handled by the Congregation for the Doctrine of the Faith. But there is no doubt that [Ouellet] was a virulent critic of the summary prepared by the CDF, and therefore a highly-placed accomplice of all the hateful opponents to the traditional liturgy in the Pope's entourage, especially in the Secretariat of State. My opinion is that Cardinals who are perplexed and in a wait-and-see attitude should ask for transparency and demand the publication of the results of the survey . . . .

Paix Liturgique – But this transparency would be harmful to Marc Ouellet's "papal" project, right?

Paul Grondin – If he is serious, because he is not the only one on the starting line. The real danger is that Cardinal Ouellet's resentments will push him to put all his weight behind preventing, during the next conclave, a solution of ecclesial peace, and especially of liturgical peace.