On Saturday July 31, a time of prayer and interpellation took place in front of the Nunciature of the Holy See in the capital of Costa Rica, San José. We asked José Pablo Arias, the president of the “Summorum Pontificum association” of this Central American country, to explain to us their situation and what initiatives they have undertaken.

Joăo Silveira - What is the name of your group and how did it originate?

José Pablo Arias - Our group is called "Asociación Summorum Pontificum Costa Rica", and it was born from the desire of many Costa Rican faithful to recover the precious treasure of the traditional Holy Mass in visible communion with the ecclesiastical authorities of our country.

It was officially formed in 2016 under the tutelage of the Institute of the Good Shepherd of Colombia, in particular at that time with the backing of of Rev. Father Grégory Lutz-Wiest and the support and advice of the diocesan priest Rev. Father Sixto Eduardo Varela Santamaría, without whose help we would not have been able to develop our initiative. Currently, Father Sixto is, to our knowledge, the only Costa Rican priest who knows how to celebrate the traditional Mass, and has been our chaplain for the past 2 years. 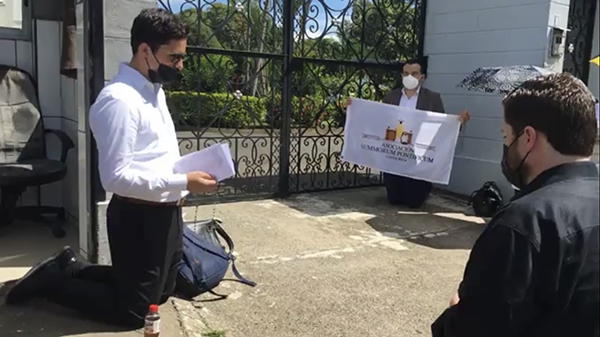 Joăo Silveira - How many faithful are there in your association and who are they?

José Pablo Arias - Currently the board of directors is composed of 7 persons, and we have more than 25 lay people directly involved. During the last masses which were able to be celebrated, there was an attendance of 250 faithful on average, especially young people! In addition, we have gathered the support of over 500 Catholics across the whole country, and our Facebook page already has over 12,000 subscribers, and this is only the start.

I emphasize that our group is made up of very diversified people, from different regions of the country, some young, others not so young, but they are mostly young people and students.

Joăo Silveira - Why did you become close to the traditional liturgy?

José Pablo Arias - The value of the Mass is infinite, therefore the reasons can be infinite. However, we can point out the inherent solemnity of the traditional liturgical action, the supreme beauty of its rites, the silence, which facilitates true communion with God, the universality in space and time, which unites us to our ancestors in the faith, the use of Latin, which, as Pope John Paul II said, enables a deep sense of the Eucharistic mystery, the coherence and the richness of the lectionary, which is followed throughout the liturgical year by us exactly as it was by our ancestors, the unequivocal and inalienable primacy of God, which with the gestures to which the traditional rubrics invite us, allow us to participate more intensely in the Holy Sacrifice of the Eucharist. 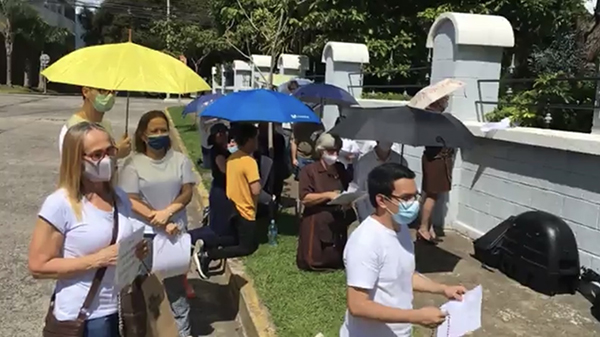 Joăo Silveira - Are you responsible for the return of the traditional Mass to Costa Rica?

José Pablo Arias - Following the motu proprio Summorum Pontificum, wherein it was unequivocally declared that the Missal of Saint Pius V - which obviously dates back at least to the time of Saint Gregory the Great - had never been abrogated, several groups emerged interested in the return of the traditional Mass to Costa Rica, and they began taking charge of the implementation of the celebration of the traditional Mass in our country.

However, in our case, we have always tried to ensure that the Mass be celebrated in visible communion with the ecclesiastical hierarchy and in full harmony with the parish communities.

Joăo Silveira - What is the situation of the traditional Mass in Costa Rica? Are there other groups and celebrations?

But it was on Sunday, July 4, 2021, that the first traditional solemn Mass was first celebrated in a parish since the liturgical reform. Besides Fr. Sixto, there was a priest from the Institute of the Good Shepherd and a deacon from the Sacerdotal Fraternity of Saint Peter, who also took part. In fact, they visited us especially for the occasion. It was a sublime celebration, and it touched our entire community in a very special way.

We also know that the Society of Saint Pius X is present in Costa Rica, celebrating Masses in the province of Alajuela as well as in that of Cartagena. 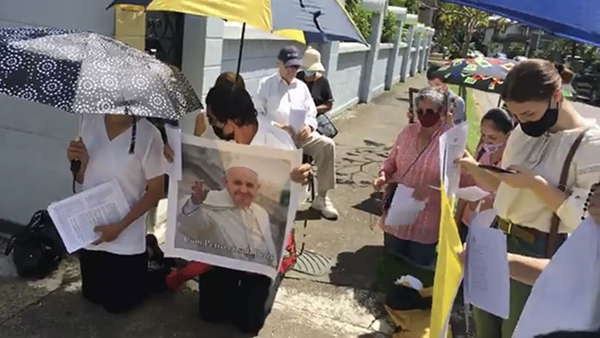 Joăo Silveira - What happened after the publication of the motu proprio Traditionis Custodes?

José Pablo Arias - On the very day of the publication, Father Sixto and our association contacted His Excellency Monsignor Bartolomé Buigues Oller, bishop of Alajuela, so that we might harmoniously continue to have the celebration of the Mass in the Diocese of Alajuela, according to article 3 of the Motu Proprio.

After a period of discernment, Bishop Bartolomé issued a decree formally prohibiting any celebration of the traditional Mass in Latin. This decree was preceded by a series of directives from the Episcopal Conference of Costa Rica, which go in the same line, i.e., an absolute prohibition and an unusual severity with regard to the legitimate wishes of the faithful, which goes against art. 3 of the motu proprio Traditionis Custodes.

Since then, we can no longer participate in the celebration of Mass according to the usus antiquior.

Joăo Silveira - How does your group perceive these decisions? What impact has this had on your group?

José Pablo Arias - With great pain and dismay. The pastoral care so much desired by our faithful has been denied, while at the same time some keep insisting strenuously on the need to be attentive and truly to listen to the needs of the laity. We endured this suffering through prayer, to which we have not ceased to resort since the publication of those decrees. The group remained united, trying to combine the pain caused by this ordeal with the sufferings of Our Lord on the Cross. 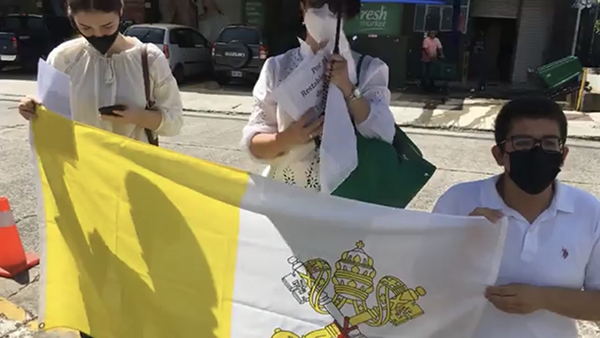 Joăo Silveira - Are you determined to continue working in defense of the Traditional Rite? With what concrete actions?

José Pablo Arias - We would like to quote Benedict XVI who, in the preface to the Russian translation of his complete works on the liturgy, declared: “The deepest cause of the crisis which has affected the Church lies in the obscuring of the priority of God in the liturgy [...] The existence of the Church lives of the good celebration of the liturgy and ... the Church is in danger when the primacy of God no longer emerges in the liturgy and , therefore, in life. "

Through so many spiritual fruits that we have been able to observe in our group, the Lord has truly shown us the beauty of the traditional liturgy and the role it plays in restoring the current crisis in the Church. That being so, it is impossible for us to forget the traditional Mass.

In addition to our private prayers, we also organized a day of public prayer before the Apostolic Nunciature, during which the Nuncio of Costa Rica offered us his help for maintaining a dialogue with the bishops, so that pastoral care may be provided in the respect of art. 3 of the Traditionis Custodes.

We will therefore continue this dialogue and, if necessary, we will also continue to hold days of public prayer with absolute respect for our ecclesiastical authorities.

We will do all we can from a canonical and spiritual point of view to ensure the reestablishment of the traditional Mass in the visible Church of Costa Rica.

Joăo Silveira – Is there a message or request you would wish to address to  want to all the Catholics in the rest of the world?

José Pablo Arias - We have closely followed the multiple reactions of the bishops around the whole world to the motu proprio of His Holiness Pope Francis, and we have noted with joy that most of the responses have been in favour of a true pastoral attitude of listening to the faithful, and also one of respect for them.

Since we cannot say the same thing in our case, we humbly ask for your prayers, asking for divine help to support us in this trial, so that we do not cease to be faithful to the Lord and to his Church, and so that we may have the strength to fight for the traditional Mass in this small country. 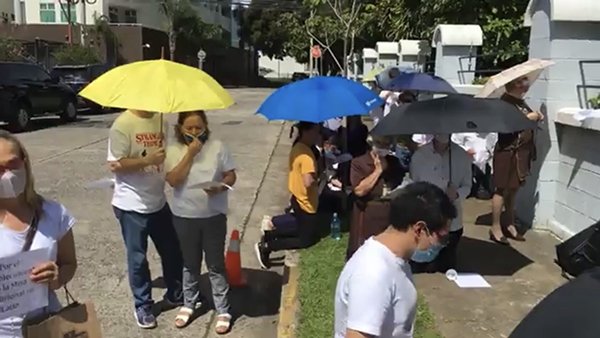 THE REFLEXIONS OF PAIX LITURGIQUE

1 - The first reflection that comes to our mind is to remark once again that the interest for the traditional liturgy is neither a "Franco-French affair", as it is said in Paris or Rome, nor, as it is said today by the Italian bishops, "a Franco-American affair", but rather a universal reality ... precisely what we published a year ago showing that the traditional liturgy was already celebrated in more than 95 countries all over the world: a development that's not going to stop.

2 – Furthermore, one may also note that if, on the one hand, the traditional liturgy has developed in Costa Rica thanks to the missionary work of the Institute of the Good Shepherd, an ex-"Ecclesia Dei Institute”, on the other hand, there are also diocesan priests who have been won over in Costa Rica because of the opening allowed by Summorum Pontificum, who, out of their concern for Peace, Faith and Charity, and because of their Love of the Liturgy and of theChurch, have been participating in this beautiful work of Catholic Renaissance ... Let us not forget either that in Costa Rica there are also priests and faithful attached to the Society of Saint Pius X ... which means that, as in almost all the countries today, the traditional liturgy is neither the prerogative nor the property of a particular group, but a richness common to all Catholics.

3 - Finally, it is impossible not to see in this quite improbable manifestation on the other side of the world the very concretization of the vision foretold by Father Claude Barthe three weeks ago, the day after the publication of Traditionis Custodes, according to which, one day soon, we should see assembled in front of 10, 20, 30 or even more Nunciatures, Catholics raising their prayers for Peace and Justice to be established again in the Church.

Yes, let us pray for "FREEDOM FOR THE TRADITIONAL LITURGY", that it may be re-established, and that the friends of Peace understand that “they should not touch our priests”. 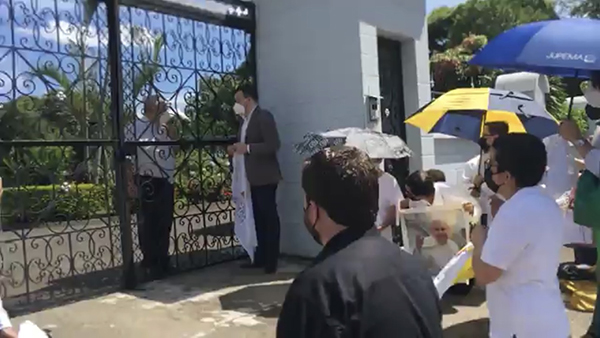