Paix liturgique: Dear Bruno: Am I to gather that you have been able to keep up your traditional “Days of  Summorum Pontificum” in Rome a couple of weeks ago, despite current constraints?

Bruno Roma: First of all, remember that for close to ten years now, in collaboration with Cśtus Internationalis Summorum Pontificum and a host of other allied organizations (Paix Liturgique, Una Voce), we have been setting up a series of events, usually on the eve of the feast of Christ the King, to bring together a sort of representative sampling of the people of Summorum Pontificum.

Paix liturgique: How did the enterprise of gathering “the people of Summorum Pontificum” once a year come about?

Bruno Roma: Originally it was Msgr. Nicola Bux who, with the support of Cardinal Ranjit (Secretary of the Congregation for Divine Worship at the time), thought of organizing a pilgrimage to Rome, to the Holy See, to give thanks for the motu proprio Summorum Pontificum that Benedict XVI had promulgated on 2007 and which finally and truly inaugurated an era of peace for the faithful attached to the traditional liturgy.

Paix liturgique: Did the first pilgrimage come out of this idea?

Bruno Roma: Very much so, yes. It took place in 2011 following a format that hasn’t changed much since: on Saturday morning the pilgrims gather in a church of the central historical district of Rome for a time of prayer; then they walk in procession to Saint Peter’s where they attend a solemn Mass at the altar of the Chair of Saint Peter. Lastly, the pilgrimage ends on Sunday with a Mass of thanksgiving celebrated at Trinitŕ dei Pellegrini.

Paix liturgique: Aren’t there already all sorts of processions in Rome?

Bruno Roma: As far as I know, there actually are very few that go beyond their parish limits. So our procession causes much surprise among the Romans . . . and the tourists. The pilgrimage, which takes place at the end of October, occurs right in the middle of the All-Saints’-Day school holidays that are common in many European nations. For this reason, there are many families of pilgrims and tourists in Rome at that time.

Paix liturgique: And this has been happening every year since 2011?

Bruno Roma: Yes, some years being stronger than others. For example 2017, when we celebrated the tenth anniversary of the promulgation of the motu proprio Summorum Pontificum; many members of traditional communities came for that.

Paix liturgique: And besides the procession, what else?

Bruno Roma: Over the years other events have been added to the pilgrimage itself, such as the Summorum Pontificum Encounters since 2015. These were particularly noted in 2017, when they were organized in collaboration with the Italian association “Giovanni e tradizione” of Padre Vincenzo Nuara, who actually asked the Encounters to pursue his work.

Paix liturgique: And how did all of this work out this year?

Bruno Roma: This year was terrible, essentially because of the Covid restrictions.  The principal constraint was the limit on the number of faithful in the churches. Already back in March we were told that the Mass at Saint Peter’s could only hold 170 faithful, whereas we normally get over 2,000. . . .

Paix liturgique: What did the organizers do?

Bruno Roma:  There were two options at the time: either give up immediately on the grounds that the pilgrimage and other activities would be impossible to run; or keep up hope and believe that the situation might improve.

Paix liturgique: Is that what happened?

Bruno Roma: Naturally with some moments of concern and other moments of hope. Alas, when all was said and done, and despite the extremely good will of the sacristy of Saint Peter of Rome and the very positive attitude of Cardinal Comastri, Archpriest of the Basilica, by the beginning of October, less a month away from the pilgrimage, it turned out that it was impossible to hold on to that Mass. That was the Mass that Cardinal Sarah, Prefect of Divine Worship, was supposed to celebrate.

Paix liturgique: So then you had to give up any kind of presence?

Bruno Roma: Not at all! First, thanks to the determination of our speakers, we maintained our fifth Summorum Pontificum Encounter. It took place as planned on Friday October 23 before a rather good audience.

Paix liturgique: As good as anticipated?

Bruno Roma: No, since over 150 participants had signed up before all these disturbances, but the sanitary restrictions prevented many foreign participants from coming to Rome. Nevertheless, over ninety people participated in all or part of the day’s activities. But it is worth pointing out that among the participants we had the joy of numbering many brave souls from Germany, Britain, Spain, Portugal, but also from France and Italy.

Paix liturgique: Who were your speakers?

Bruno Roma: Several of them were prevented from coming, like our friend Trinidad Dufourq, who was supposed to tell us about the progress of traditions in Argentina, and Mr. Antony Ike, a seminarian who was supposed to discuss the interface between African culture and Catholic tradition. But all is not lost, and those two speakers will be in Rome for our sixth Encounter in 2021, God willing.

Paix liturgique: And who were the speakers this year?

Bruno Roma: There were four of them. In the first place, we had the privilege of hearing Dr. Joseph Shaw, chairman of the Latin Mass Society of England and Wales, give us his thoughts on the concept of tradition. His was a high-quality study, which we shall publish in one of our forthcoming Letters of Paix Liturgique. 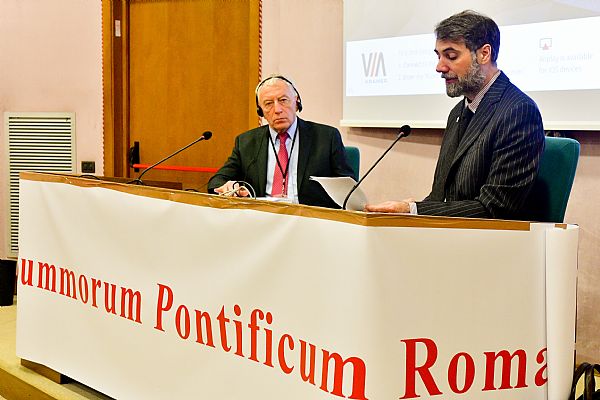 Paix liturgique: And then?

Bruno Roma:  We had the joy and the privilege of hearing a magnificent lecture given by His Eminence Cardinal Raymond Burke, whose text we had already published in our Letter 112 (6 November 2020). As that Letter stated, he appeared once again as a sort of Cardinal Protector of the Summorum Pontificum movement. He underscored its efforts, and saluted all those who have worked, and keep working, for the traditional Mass, exhorting them through their representatives in Rome to develop all the possibilities embedded in the motu proprio of Benedict XVI. 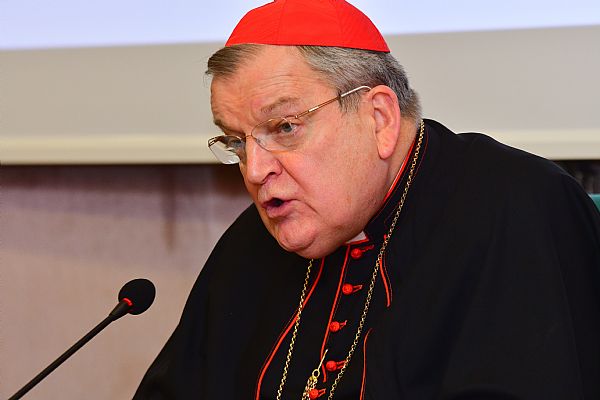 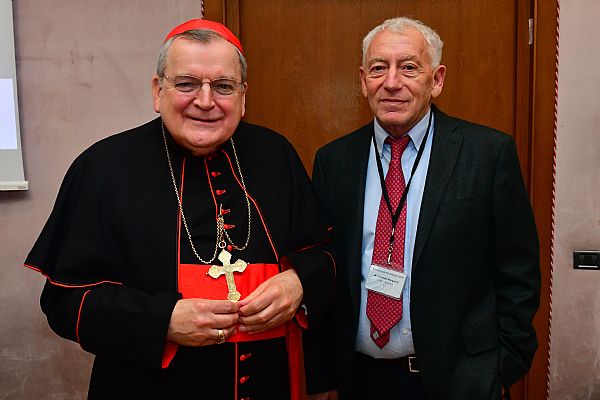 Paix liturgique: And then followed the time for the actual Encounters…

Bruno Roma: …among all the guests, gathered around a beautiful buffet which in fact and as usual was one of the outstanding moments of that day. 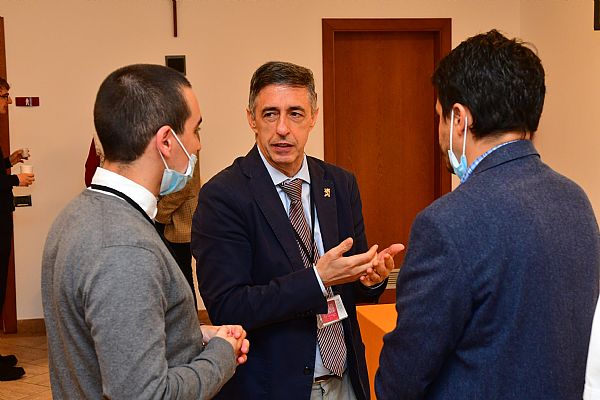 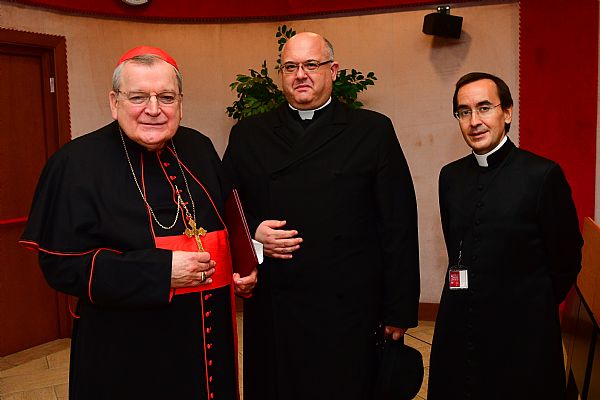 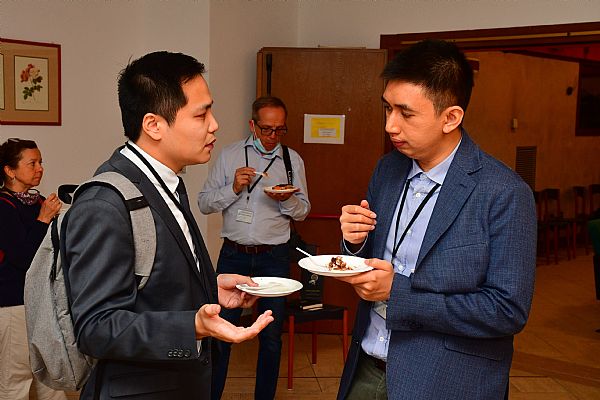 Paix liturgique:  Then the work resumed.

Bruno Roma: Yes, with a highly interesting presentation by Jean de Tauriers, who outlined for us the international and missionary dimensions of the Pilgrimage of Notre-Dame de Chrétienté to Chartres, the historic model of the great religious demonstrations of piety of the traditional Mass. 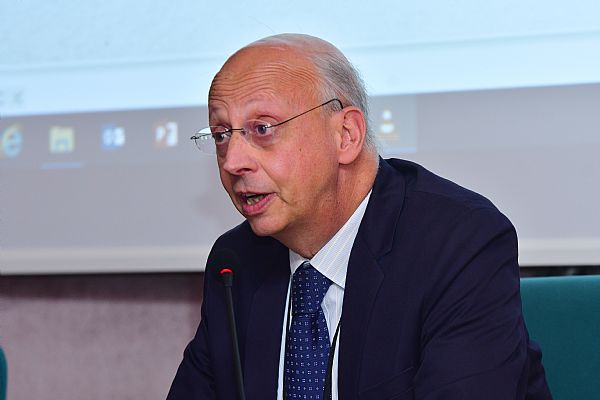 Paix liturgique: And there was a conclusion, given by Christian Marquant

Bruno Roma: It was actually more than a conclusion, as Christian Marquant sought, in one hour, to paint a history of our attachment to the traditional liturgy. In doing so he insisted on the fact that it was this extraordinary resistance that had spurred Roman authorities first to tolerate us and then to reintegrate us fully into the official liturgical sphere, whereas there were those who tried to convince us of the contrary, namely that we exist only thanks to that tolerance. 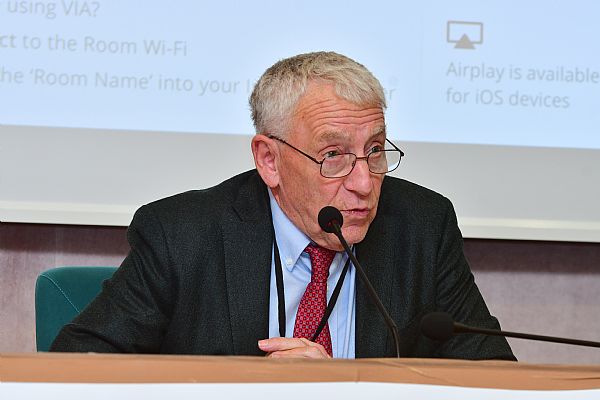 Paix liturgique: Does that make a big difference?

Bruno Roma: Yes, of course, since in the latter case we exist only because certain authorities have willed and accepted it, whereas in the former case we exist thanks to our attachment to our Catholic faith and need not fear any putative “backlash” from certain persons of ill will who today might attempt to cancel the benefits that were granted to us yesterday.

Paix liturgique: Was that the end of the day, then?

Bruno Roma: Not at all, because it ended in a magnificent ceremony in the church of Saint Mary of the Martyrs, i.e. the Pantheon, where the rector was able to welcome 170 faithful (there were 750 last year) for the pontifical Vespers of Saint Raphael.

Bruno Roma: Yes, thanks to our friend Don Giorgio Lensi we had the joy of welcoming Bishop Janfranco Girotti, titular bishop of Meta, and Regent Emeritus of the Apostolic Penitentiary. He presided over a beautiful ceremony organized by priests of the Institute of the Good Shepherd. 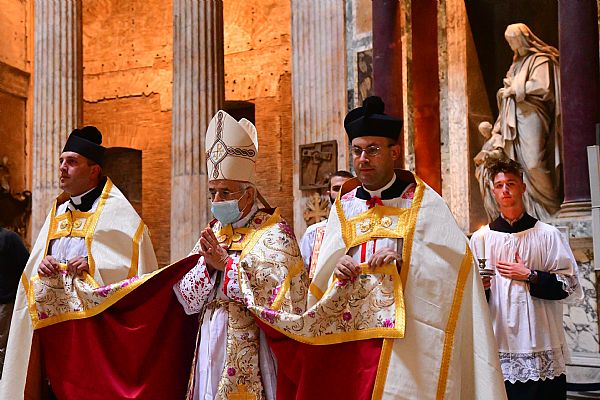 Paix liturgique: Now this was not the first time that you organized a ceremony at the Pantheon on Friday?

Bruno Roma: It has become a tradition that provides a bridge between the Encounter and the pilgrimage. It is above all a magnificent time of prayer, enriched with near-heavenly music, which in this privileged location gives us a foretaste of heaven. 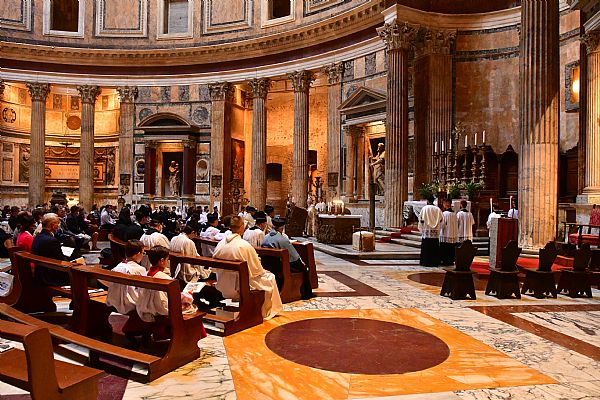 Paix liturgique: And what happened on Saturday, since—as I understand it—the Saturday procession had become unfeasible because of sanitary measures?

Bruno Roma: Indeed, that is why our intense Summorum Pontificum event ended at noon on Saturday with a beautiful pontifical Mass of thanksgiving celebrated by Cardinal Burke in the church of Santa Trinitŕ dei Pellegrini. The doors were closed, but the place was filled with a crowd of representatives of the people of Summorum Pontificum hailing from all over the world, all happy to be participating in this beautiful ceremony. 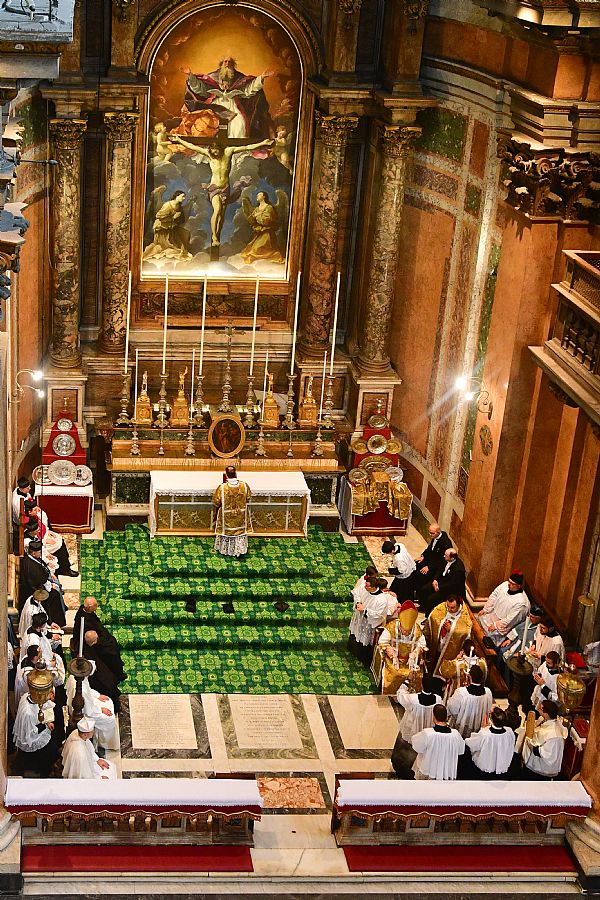 Bruno Roma: Quite right, but we hope that next year our Encounter and the Summorum Pontificum pilgrimage can run smoothly—and we’re already preparing for that. 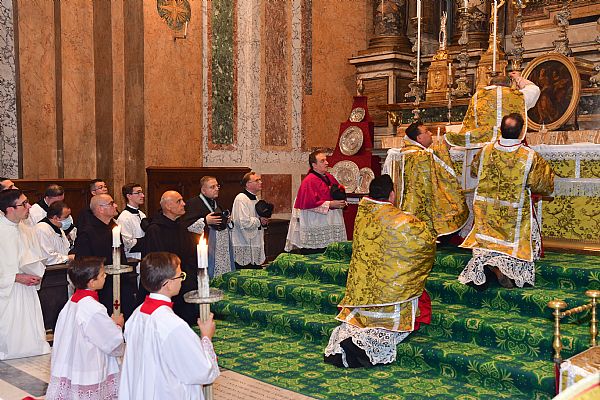 Bruno Roma: Why yes, all the organizers are already at it, for this new high point of the people of Summorum Pontificum, which will take place October 29, 30, and 31, 2020 under the patronage of Archbishop Salvatore Cordileone of San Francisco.