THE SIXTH MEETING AND NINTH PILGRIMAGE IN ROME OF SUMMORUM PONTIFICUM

Once again, as we resume our yearly round of activities, we are less than two months away from the two major events in the world of Summorum Pontificum:

-Friday October 23: our sixth Summorum Pontificum Encounter will take place in the great amphitheater of the Augustinianum University, a stone’s throw from St. Peter’s Square, 26 via Paolo VI. It will include an impressive line-up of friends and defenders of the traditional liturgy. We’ve asked Christian Marquant, president of Oremus, to take a few questions on the subject.

-Saturday October 24: the ninth pilgrimage organized by Cśtus Internationalis Summorum Pontificum (CISP). Here we’ll first present the interview that Fr. Claude Barthe (the ecclesiastical assistant of the International Summorum Pontificum Pilgrimage)  recently granted to our friends over at L’Homme Nouveau; we thank them for granting us permission to publish that text. 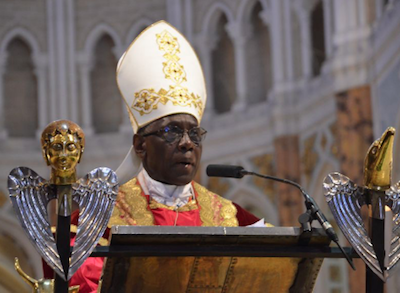 AN INTERVIEW WITH FR.CLAUDE BARTHE CHAPELAIN OF THE SUMMORUM PONTIFICUM PILGRIMAGE

Every year, since 2012, a pilgrimage takes place in Rome in thanksgiving for the motu proprio Summorum Pontificum of Pope Benedict XVI. Will it take place this year? The Chaplain of this meeting, Father Claude Barthe announces that not only will the pilgrimage take place but also that Cardinal Sarah will celebrate the major mass at Saint Peter's Basilica on October 24th.

L'Homme Nouveau :  So the Summorum Pontificum pilgrimage to Rome will take place this year?

Father Claude Barthe : Yes, like every year since 2012! It is true that this year is quite special: reigns, because of what is called the "health crisis", a rather surreal atmosphere which affects all religious activities and especially pilgrimages. I was in Lourdes a few days ago, where there are only a few handfuls of faithful. However, after careful consideration, the Coetus Internationalis, which organizes the Roman Pilgrimage, has decided, considering what this Catholic enterprise represents, to maintain it, taking into account the constraints imposed on us.

L'Homme Nouveau :  What will be the program?

Father Claude Barthe : The pilgrimage itself will be reduced to the most important act: the Pontifical Mass in Saint Peter's Basilica, at the altar of the Chair, on Saturday 24 October. With of course, the next day, the Sunday Mass of Christ the King.

On Saturday 24 October, pilgrims, clerics and faithful will meet in front of the entrance to the Basilica at 11h30, where Cardinal Burke will welcome them, and they will enter with him in Saint Peter. At 12h00, Cardinal Robert Sarah will celebrate the Pontifical Mass of Saint Raphael the Archangel.

Father Claude Barthe : The Vatican authorities, at the present time, ask that the faithful assisting ceremonies in Saint Peter’s Basilica do not exceed the number of 150. It is very few. But it is possible that these measures will be eased before the end of October.

In any case, exceptionally, we ask those who want to participate in this mass to register very quickly here: https://bit.ly/3hCY4K4. We will save the entries as they are "clicked" and we will confirm them. When a certain quota is reached, we will notify those who exceed this quota that they will be placed on a waiting list, and we will keep them informed of what we get from the Basilica authorities.

Father Claude Barthe : According to tradition, our pilgrimage will end on the feast of Christ the King. The Pontifical Mass will be celebrated at 11h00, on Sunday 25 October, by Cardinal Raymond Leo Burke, in the Church of Trinitŕ dei Pellegrini which, according to its vocation, serves as a sort of headquarters for the pilgrimage, where the priests participating in the pilgrimage celebrate their private masses.

L'Homme Nouveau :  In addition, the Oremus / Paix Liturgique association had announced a meeting. Does it still hold?

Father Claude Barthe : Absolutely. The organizers will soon make an announcement on this subject, but I can tell you that this Meeting will be held on Friday, October 23rd in the aula magna of the Augustinianum, near Saint Peter's Square, between 10h and 16h. This year it will receive communications from a series of speakers, including that of Cardinal Raymond Leo Burke, and also of Joseph Shaw, Chairman of the Latin Mass Society, Jean de Tauriers, President of ND de Chrétienté, Father Antony Ike , a Nigerian seminarian specializing in Catholic Africa and Trinidad Dufourq who will testify to the vitality and development of the traditional Mass in Argentina. The organizers ask to register for the Meeting here: https://bit.ly/3in6sOl.

The Meeting will end the same day at 17h00 in the Basilica of Saint Mary and the Martyrs of the Pantheon, with the singing of Pontifical Vespers, chaired by Mgr. Gianfranco Girotti, titular Bishop of Meta, and Regent Emeritus of the Apostolic Penitentiary. Again, it will be necessary to register for vespers at the Pantheon: https://bit.ly/2XpGhhM.

L'Homme Nouveau :  Can we say that this 2020 Pilgrimage will be a matter of principle?

Father Claude Barthe : It will be much more than that! We realize that this year it will be very special. For example, many of our friends in America will not be able to join us. But those present will represent all the intentional pilgrims of the world who will accompany us with their prayers. The pilgrims in re will represent the crowd of pilgrims in voto! This year, we will again bring to the Tomb of the Apostle the plea for the salvation of the Church and for the dissemination of the ancient Roman liturgy which will contribute powerfully to it through its radiation of very pure lex orandi.

Paix liturgique: Some people will be surprised to know that you are able to hold your sixth encounter this year, despite the health crisis.

Christian Marquant : I understand their point of view; indeed, everything is harder to organize and to get going. But we thought it was imperative not to let up, and, whatever the hurdles, to give a witness to the strength of our love for the traditional liturgy, which is now celebrated in 88 countries and on every continent.

Paix liturgique: And you were successful in bringing in your speakers?

Christian Marquant : . A few are still delayed in Asia and America. Still, we are offering a high-quality, international group of activists for the traditional liturgy, which is a precious lex orandi for the Roman Church.

Paix liturgique: Could you introduce a few of them to us?

Christian Marquant : I’ll do you one better at the end of the interview by providing a detailed schedule of our day. For now, though, I’ll tell you that in addition to Cardinal Raymond Burke, who will honor us with a communication, there will be a few speakers of great consequence. I am here of course thinking of Jean de Tauriers, president of Notre Dame de Chrétienté, who will tell us about the international dimension of the Chartres pilgrimage. Also there will be Joseph Shaw, President of the Latin Mass Society of England and Wales, who will discuss the concept of Tradition, though without “overshadowing” Trinidad Dufourcq, who will reveal some surprising—and encouraging—facets of tradition in Argentina, or our seminarian friend from Nigeria, Antony Ike, who is a specialist on the interface between African mentality and ancient Catholic tradition.

Paix liturgique: Your day will end at the Pantheon with the chanted Pontifical First Vespers of the feast of Saint Raphael, presided by Bishop Gianfranco Girotti, right?

Christian Marquant : That was especially important to us! The Pantheon is actually the church of Saint Mary of the Martyrs. And it is precisely the faith and courage of the millions of martyrs of yesteryear and today that we need. We shall humbly ask of that multitude of glorious witnesses that we may be their kind of Christians.

Paix liturgique: Is there a cap on the number of participants?

Christian Marquant : The great amphitheater, aka the aula magna, of the Augustinianum is spacious and we’ll be able to fit in great numbers . . .. On the other hand, for Vespers at the Pantheon, there is a cap of 70 persons seated and 130 standing, for a grand total of 200 faithful. So far, we already have close to 100 people signed up for the Pantheon Vespers. So those who wish to attend and have not yet registered should hurry up!

Christian Marquant :  Yes, in fact in the Pantheon we should like to give a symbolic representation of the faithful from the 88 countries in which the traditional liturgy is currently celebrated. That is why we’re going to display the flags of each one of those countries: to manifest that symbolic presence.

Course of the day

From 9 a.m.: Welcome of participants

10 a.m.: Claude Barthe, chaplain of the Coetus internationalis Summorum Pontificum (CISP) and coordinator of the conference

10:15 a.m.: Trinidad Dufourq, "The revival of traditional liturgy in Argentina: situation and perspectives".

3 p.m. : Anthony Ike, PhD (Nigeria), "Is the traditional Catholic liturgy too European to be non-African?"

3:30 p.m.: Christian Marquant, "How far will the irrepressible development of traditional liturgy spread throughout the world?"

4 p.m.: End of meetings at the Augustinianum.

5 p.m.: At the close of our meeting, solemn Vespers will be sung at Saint Mary of the Martyrs (Pantheon) with the singing of the pontifical Vespers of Saint Raphael, presided over by Mgr Janfranco Girotti, titular bishop of Méta and Regent Emeritus of the Apostolic Penitentiary

Contribution to the cost of meals

We will ask the laity for a voluntary contribution of at least 10 € per person for the lunch buffet.

The proceedings of the 6th Summorum Pontificum gathering will be simultaneously translated into English, Spanish, French and Italian.

To register for these Roman Meetings

Vespers at the Pantheon: https://bit.ly/2XpGhhM