THE TRADITIONAL MASS IN CHINA

We present the interview our friend Massimo Battaglia conducted with Fr. John Song, a Chinese priest who is currently finishing up his theological studies in Germany. His testimony both informs and enlightens us about the difficult situation of Catholics in China and the root causes of the attachment of the Chinese faithful to the traditional liturgy. 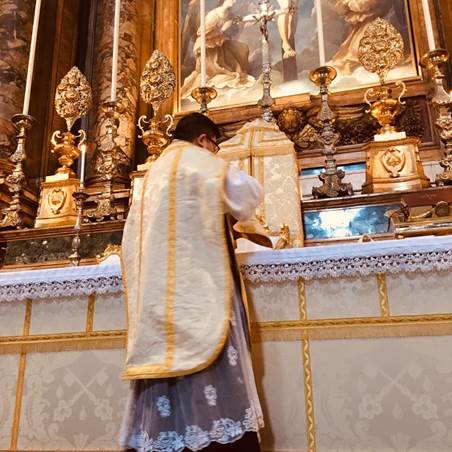 Massimo Battaglia – How does one become a priest in China nowadays?

Fr John Song – I would say that being a true priest, i.e. Catholic and holy, is never easy. But in my opinion there is no difference in becoming a priest whether one is Chinese, Italian, or French. Yet it is true that becoming a priest in China presents particular difficulties, especially because of the current religious persecutions in our country. Nevertheless, I remain convinced that the Communist persecutions are less serious for us Catholics than is the widespread confusion within the Catholic Church herself, both because of the renunciation of the authentic Catholic faith and because of profanations in the liturgy.

Massimo Battaglia – Are there new conversions in China these days?

Fr John Song – Yes, Deo gratias, there are many conversions to Catholicism in China today. Although neophytes are generally not sufficiently well prepared for their baptism, the Holy Ghost is ever at work in His Church; He protects and guides them in their path towards the truth, sole and entire.

Massimo Battaglia – Does the Church in China share characteristics with the persecuted Church of the first three centuries?

Fr John Song – I think so, yes, there is a certain resemblance with the Church of the first three centuries within the Roman Empire. Now, granted that in Mao Tse Tung’s day the Church was faced with a violent persecution close to that which the early Christians had known, today we face an insidious persecution whose goal is to transform the Church into a church that is no longer the true Church of Christ. It is far more dangerous for the faithful, who are disorientated and sometimes may leave the true faith, unawares.

Massimo Battaglia – How did you discover the traditional Mass?

Fr. John Song – I was born in a Catholic family that had kept the faith for over 150 years. As you know, the Church in China was isolated from the rest of the world, and so from Rome, for about thirty years from 1949 to 1978. Therefore, well into the 1990s, recently liberated priests kept celebrating Mass according to the older rite, since at the time they were aware of neither Council nor liturgical reform. After 1990, however, they joined the mainstream of the Council reforms and went down the same path as the other regions of the world. As I was born in 1986, I had no personal experience of the older rite, which had stopped being celebrated in the 1990s. I remember that, for a few years, my grandfather had stopped attending Mass; he would say that the modern Mass is no longer a sacrifice but seems merely to be a memorial of the Lord’s Last Supper. He thought this without having ever studied theology or liturgy, but his faith was so strong that he was quite able to make out the differences between the new liturgy and the ancient rite that had nourished his faith from childhood.

Massimo Battaglia – Oriental culture attaches much importance to rituals, to the sacred, and to respect, doesn’t it?

Fr John Song – You are right to say that Chinese culture and traditions, founded as they are upon the teaching of Confucius, placed a premium on rituals and on respect for elders. But since the Cultural Revolution, which turned China upside down from 1966 to 1976, the traditional values of the Chinese world have been nearly totally eliminated. This may seem like an exaggeration, but from a cultural point of view, the modern Chinese are ignorant barbarians . . . .

Massimo Battaglia – Is there a “resistance” to the liturgical reform of 1970 among Chinese Catholics?

Fr John Song – I don’t know that there is a “resistance” to the liturgical innovations in China, because most Chinese are unaware of the changes. But whenever I go home to China, older people always ask me to celebrate the traditional Mass, as they feel a real spiritual need for it, as opposed to what they find in contemporary celebrations in contrast to what they knew in the old days. Yet many young people, who live in an empty world, also feel this need even though they never knew the liturgy as it was celebrated in the olden times . . . .

Massimo Battaglia – So there is a real demand for the celebration of the traditional Mass in China?

Fr John Song – Yes, and not only among older people but also among many youngsters who ask me to celebrate it. This wish doubtless expresses a certain nostalgia for a long-gone past in China, but it is above all the affirmation of a desire to pray in perfect harmony with one’s Catholic faith.

Massimo Battaglia – How did you learn to celebrate the traditional Mass?

Fr John Song – I have always had an interest in learning it, especially because of the love my grandfather had for the traditional Mass. It was the many requests for the celebration of this Mass that convinced me to celebrate it. And so I underwent training with a priest friend.

Massimo Battaglia – Do you think that the traditional Mass will remain important in the future?

Fr John Song – I am convinced that it does have an important future role. Not only because of its external beauty, but especially by reason of the saying lex orandi lex credendi: the traditional Mass reveals the Catholic Church’s sound doctrine, and is a vigorous means to fight the heresy of neo-Lutheranism and neo-Modernism currently assailing us. Furthermore, the demand on the part of the faithful is just and fitting for their own sanctification and that of the world. It is our duty as pastors to contribute to the spread of grace through the sacraments.

Massimo Battaglia – Why, do you think, does this Mass attract so many young people, many of whom had abandoned religious practice?

Fr John Song – I haven’t had any pastoral experience with youth in my own country, and I cannot tell why the traditional Mass attracts them so. But I do know that in China there are many young people who wish to live their faith seriously in spite of ignorance and secularization. Because of the failings and mistakes of the shepherds, the young are losing their Catholic identity. Some, therefore, realize there must be a return to the tradition of the Church and to Catholic spirituality.